After installing UR7, there are chances you may not find any changes with respect to the much talked about Read Optimized form. That is because the default setting for RO is switched off and by default all forms are expected to open in Edit mode.
You need to make the change at Organization level using the Settings Dialog.

You can either have the forms open by default in Read Optimized (RO) mode or Edit mode. If you choose RO, all forms for all users would open in RO unless individual users have overridden the default to set their own preferences using the individual options available to each user. 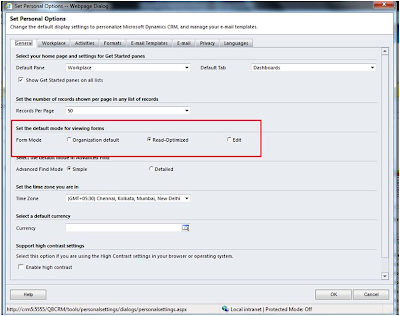 Note if you uncheck the Allow users to select a mode for viewing forms, you can force the users to follow the organization level setting enforced by the administrator. The above option will then not be available on individual user settings form.

So what is a Read-Optimized form?
This form will display the record in read-only mode this means that user will not be able to edit the details on the form. The idea behind this being, most often users access existing records for viewing the details rather than editing them.

The benefit of RO form is that it loads much faster than an Edit form. It is much like the Print Preview Option that was always present in CRM. When you did a print preview it would show up a window with all the details laid out just as it is on the form. 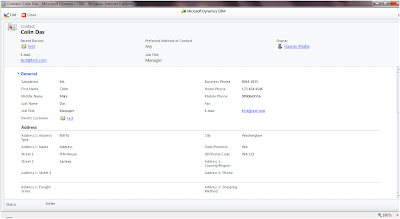 The trade-off however has been that it would now not include or support the following
1. Left navigation links missing
2. Ribbon Missing
3. Web Resources cannot be included on the form, if included the form will not open in RO even if user preference is set to RO form for viewing.
4. If you have scripts included on the Onload event then again the forms would not open in RO view until the scripts are removed from the onload event handler.

Here is what the url now looks for Read Optimized Form. A new flag &rof has been provided that lets you provide the RO setting. True would open the form in RO view if it is possible i.e it does not include scripts or web resources that prevent the form from opening in RO view.

The above link would open the account form in RO mode even if the users individual setting was set to Edit mode.

If the &rof flag is not included in the URL then it will open based on the default View settings for the user.

What if you would want to check the activities that were earlier available in left nav links on the form? Add them as a sub-grid on your form and the RO view would list them out 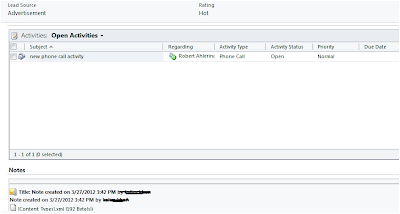 You can open the activities to view the details and then these would also open in RO mode. But you are not allowed to create new activities. The buttons are missing.

If you notice the notes pane, it lists the notes but you cannot download the attachments or add new notes.

If you had Webresources that you wanted to include on the form even in RO mode? You include that instead as an IFRAME. In the example below… we have picked up the web resource URL and copied that in the IFRAME.

The URL to the Webresource should include the Organization name if you are providing relative url.
/orgname/WebResources/new_/Maps.html

You can design multiple role based forms in CRM and the Read-Optimized mode will apply to all of the forms defined. If a user has access to more than one forms, just like before it would by default open the last viewed form by the user in RO view.