Earlier organizations invested in different methodologies to retain customers without any cohesion. What did it cost – resources and financial burdens. Over the past few decades, CRM systems have cropped up at an unmatchable pace and adapted to the super-modern slick technology. Microsoft has been one of the earliest adopters of innovation and have maneuvered their way to the top by intelligently strategizing. As a result, there is a more pragmatic approach that has cut down the overhead of Dynamics 365 CRM.

Associating with Dynamics 365 CRM as an esteemed ISV Partner has been an exciting journey for us. We have learned immensely, and contributed our bit to the community over the span of years. Our solutions embedded in Dynamics 365 CRM have been supplemented its functionality considerably. One such solution from our suite of productivity tools is Click2Clone. It is an extremely powerful productivity app that clone Dynamics 365 records in just one click and reduces the manual effort while creating duplicate records.

We keep appending its functionality in order to reduce complexity, and enhance its performance. In our last blog we covered the business aspects of Click2Clone, while this blog focuses on a specific functionality of the tool. Until our last release, only self-cloning was enabled i.e., cloning in the same Entity records, which we have taken further in this release. Yes, now it’s possible to clone existing records along with relationship details from one Entity to another Entity.

As Sales module follows an entire process, every Entity is connected to the other Entity. Thus we can clone Dynamics 365 CRM records of one Entity to another Entity in order to transfer relevant data and perform effectively.

Let’s take the example of cloning record of a custom Entity Donations to another custom Entity Floods. For instance, say there is a Donation record where we pursued a prospect John, to donate $200 for Floods. The first step is to create a Donation record for it. After we have created the record, we follow up with an email or phone call to assure if John still wants to donate. Luckily, he is still interested and wants us to send him an invoice for tax saving. We clone the Donation Entity record against John to create a new record in Invoice Entity.

After the invoice is sent to him we need to create a record in Flood Entity to keep track of the people who have contributed for Flood Relief. Now, we have to create a record of it in our Dynamics 365 CRM. If we enter the data manually it would take a lot of time. This is where Click2Clone’s new feature kicks in. Using Click2Clone, we can clone the records of Donations Entity to Flood Entity with the click of a button and a new Flood record with the details will be created.

Assume this is not all, you also want to clone the relationships between both the Entities. This is needed so that you can clone child records of one Entity to another Entity. Say you want to copy all emails that are sent to John and keep a record of it in Flood Entity record. This is a task that cannot be performed otherwise in Dynamics 365 CRM. Using Click2Clone, by creating a child template Donation Email to Flood Email, you can perform this task. After creating this child template when you clone the Donation record against John using Donation to Flood Template a new Flood record with cloned ‘Emails’ will be created. Isn’t it magical!

Thus you have a new Flood Entity record against John along with all the Email communication. This is an example of nonprofit where records of Donation Entity are cloned to Flood Entity. There are innumerable instances where you can simplify the task of creating an Entity record by cloning records of One Entity to another Entity. Let’s delve deep and explore the advantages of this feature:

There is a huge possibility for erroneous entry if you create new records manually. With Click2Clone you can copy the records by cloning one Entity record to another Entity without any manual intervention. Thus there will also be cloning of child records from one Entity relationship to other with data integrity. There is a new cloned record created for another Entity for the existing records using this feature. All the attributes you want to be cloned in your Target Entity records have to be mapped.

Given you don’t have to iteratively enter the same data it expedites you entire Sales process. You can perform faster, accurately and with more cohesion between your Entities and even visualize them directly. You can see how quick creation of record in another Entity by cloning/copying saves a lot of time thereby boosting the speed of execution.

Cloning one Entity record to another Entity saves unnecessary effort and costs and becomes a strategic enabler of your business process. Using this feature you can clone Entities like Invoice, Quote, Order, Opportunity, Lead, Account, Contact and other OOB and custom entities. This depreciates the otherwise required extra effort and leads to utilization of time in other endeavors.

This feature is easy to implement as it avoids complexity, and can be deciphered even by a normal user. Its feasibility leads to cloning of existing records with much ease within Dynamics 365 CRM. You can experiment between Entities and create child templates based on your requirement.

As mentioned above, we have seen with the help of an example how this feature helps in augmenting your business process. Cloning one Entity to another Entity makes the functionality of Dynamics 365 CRM even stronger.

If you want to explore this feature download our solution from here!

For any query, suggestion or demo mail at crm@inogic.com

We would like to take a moment to introduce our new product Alerts4Dynamics to you. Alerts4Dynamics lets you schedule and manage alerts in Dynamics 365 CRM to notify users about the updates in CRM, due invoices, reminder to send quotes, etc. You can define target audience and send them priority based alerts via pop-ups, form notifications and emails. You can also view the log of read/dismissed alerts by users and also create alerts for multiple records by defining rules. 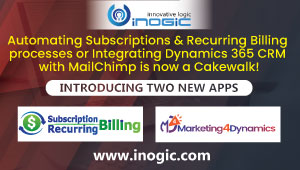