3. Create or Update through a single request – Upsert in Dynamics CRM 2015 Update 1: The logic to identify whether a record has to be created or updated was always something the developers had to handle themselves.With the API enhancements introduced in Dynamics CRM 2015 Update 1, we have now been provided with a new Request “UPSERT” which solves this problem. This blog talks about this new request called “UPSERT”.

These are few top features which have been liked by our developers. We will be posting regularly on this and other topics for our Dynamics CRM developer friends. Please do keep sharing our posts and following Inogic Blog.

Other than developing popular innovations like Maplytics and Inolink. Inogic also has a dedicated team who can help you for any of your Microsoft Dynamcis CRM development requirement be it migrations, integration’s etc. Contact us on crm@inogic.com 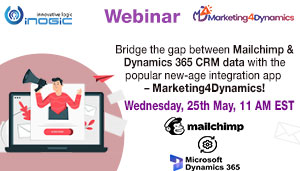